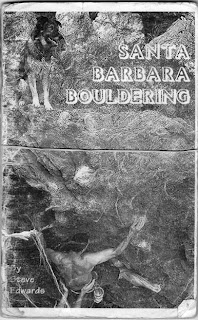 Since I haven't posted anything in over a year and since it's been pouring down rain for a few days, here we go.

Today I picked up my old copy of Edwards' Santa Barbara Bouldering (1997) and thumbed through it for the first time in over a decade. Marked on the inside cover with my name and The Castle phone number should I lose it, it's quite a walk down memory lane. The book is bound together with a rubber band, torn up and marked up with scribbled field notes and comments on nearly every page. At my current state of climbing psyche, it's hard to believe how psyched I once was, spending every rest day walking through the hills looking for more stuff.

One of the more interesting pages is one of the maps to The Brickyard (map 2) which covers the area from The Ant Boulder, called The Cryptozoology Area, to over past The Soot Patrol Boulder, called The Backyard. There's lots of good stuff in these scribblings, most importantly what would become most of the problems on The Dancing Outlaw boulder, noted on the next page as "overhanging boulder with 2 or 3 very nice hard problems...needs some good cleaning and a tree trim." 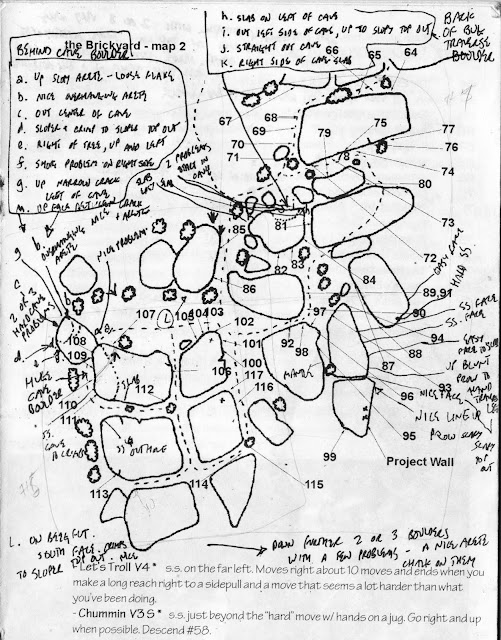 Starting at the upper left of the map, in my notes "Behind the cave boulder" would mean behind The Soot Patrol Boulder. To get one oriented, problems 108 and 109 are Watch the Dog and Soot Patrol, and in my notes, problem c) "2 or 3 hard cave problems" became Dancing Outlaw, etc., d)  Smooth Criminal, and noted as "nice problem" a) Old & In the Way, a problem I still think is a great moderate. Moving over to The Soot Patrol boulder, problems 110 and 111 are Mister Witty and Clean the Grill respectively, between them I noted "ss cave to crimps", which became All Mod Cons. The face around the corner between 111 and 112 (Draw or Call) I wrote in "slab", which became Science is a Cruel Mistress. Speaking of Draw or Call, next to its entry a couple pages later I wrote down "Fucking hairy! R or X rating for sure". I've done Draw or Call exactly twice and broke holds off of it both times. It's high and it's choss. One of the times I snapped a hold off and hit the ground tumbling back to the boulder behind just barely missing conking the shit out of my head, barely grazing it on the rock. I remember Ratso running over to me and licking my face to make sure I was ok. The problem may have cleaned up by now, but I'll certainly never do it again.

Other interesting notes in The Brickyard section are Grotesque Old Woman (problem 89 on the map), which Steve gave 1 star, I emphatically wrote "FANTASTIC!! ***" followed by "sit-start maybe V8/V9?". The sit-start turned in at a much harder V10 although I remember Wills dispatching of it very shortly after we showed it to him.

Also, many people don't know that Mister Witty was once a 3 star V5 in its original rendition. There were originally two large plates at the lip of the overhang making everything significantly easier to get on the slab, not to mention there used to be a big knob to grab once you got your feet up. Well, first the left plate broke (it was still V5 but a bit harder) and then the right hand plate broke, leaving you with those measley crimps that exist to this day to negotiate your way over the lip. My first note is "hasn't gone since another hold broke". The guy who broke the second lip hold wanted to glue it back on but I expressed my distaste for that idea and we kept trying it. My second note (too bad I didn't put dates on things) reads "V7 now, very nice!". The top knob broke a couple years later, but didn't affect the grade enough to change it. It's a great problem still, but I remember the original V5 Mister Witty with all holds intact being better. 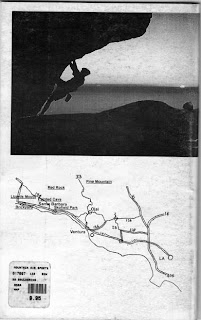 As a final note on Steve's fabulous original SB bouldering guide, I have two copies on my bookshelf. The copy pictured above is one of the first that came out of the box when Steve received them from the printer, and the copy shown to the right is most definitely the last one sold on the retail market. I walked into Mountain Air one day, which was the last place that still had copies to sell (I was doing the distribution for Steve at the the time), and they had a single copy left. So I bought it.