Note: Recently I've spent some time compiling and scanning as much printed medium that I could find that covers climbing in the Santa Barbara area. Originally intended to be one post, I've broken it up into what will be several, with some [I think] cool stuff that appeared in books, magazines, and newspaper articles over the years.
Part V: 1997-2003 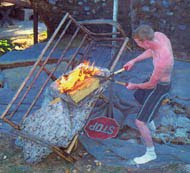 Kings of The Castle - Climbing - November 1997
Wills wrote this short piece in winter 1997 in Climbing's old section that they had highlighting home walls. Ahhhh, the good old days. You know, back when Climbing Magazine was actually worth reading (although on its last legs).

This one brings back fond memories, showing a little slice of life into what The Castle was at that time, which from the picture that they printed (unbelievably) was bordering on unbridled chaos. I recall that the editors wouldn't let Wills print any of the better pictures because no one was 'climbing' in them, so they printed the one that had Arvind the Maniac on the Stairmaster wall, while the Pukester attacked a burning couch (which ended up in the swimming pool) with a pair of garden shears.

Like I've said many times before, it all looks a bit nuts in hindsight, but at the time everything seemed perfectly normal... 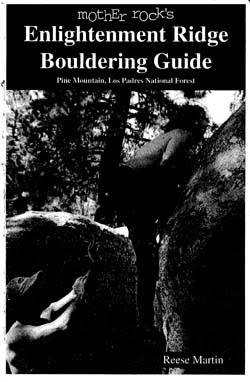 What it also is, is some of the worst mapping I've ever seen. While Steve Edwards' maps to the Brickyard and Lizard's Mouth were, ahem, not good, Reese went one better in confusion out here at Pine Mountain. No doubt Reese definitely had prodigious talents, but cartography was not even close to being one of them.

After Steve put out his Falcon guide in 2000, which had overlooked a lot of Reese's Pine Mountain information and re-named a number of problems, I went back and tried to set the record straight, which was a complete nightmare because of the atrocious maps. After many long hours of walking the area and trying to figure out what Reese had called what and what Steve had called what, I feel fairly confident that I got it [mostly] correct, but Kee-Rist it wasn't easy.

This guide was put out as an extra in the old SoCal mag "Mother Rock", which sort of carried on where Allez had left off and I believe remained in print from 1996 until 1999 or so??

On a side note: Reese Martin, a prolific first ascentionist and tireless worker for the Access Fund and climbing related issues, as well as a charming ladies man and all-around good guy, passed away in a paragliding accident in 2004. Reese, shown below on the far right in black, at The Players Ball 1997. 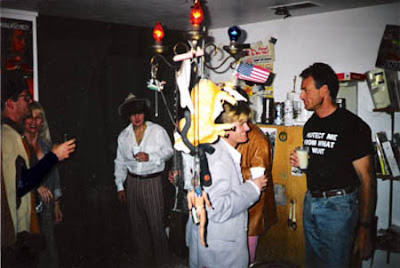 (from l-r: Steve "Emmanuel Overdrive" Edwards, unknown dame Edwards picked up at The Agave the night before - "We're having a party tomorrow, you should come.", Shandor "Condor" Madjar, The Bruce, a hidden Reed Bartlett (in (p)leather and (p)ink pants), and Reese Martin) 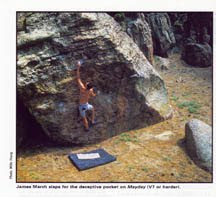 Pine Mountain Bouldering - Climbing - May 1998
One of the best magazine style mini-guides I've ever seen was this one for Pine Mountain that Wills Young put together when he was living in Ojai and doing very little except for scouting new problems and climbing his ass off.

This thing covered about 7 pages of the May issue encompassing a couple hundred boulder problems, most of the ones that people are still climbing on exclusively today (meaning the plums had been picked by a VERY motivated crew). It's true that there's a lot more bouldering out on Pine Mountain still, but it's also true that you could take this 13 year old mini-guide out there and come away 100% satisfied with what is truly one of my all-time favorite areas.

Another bit of trivia is the notation of Whiplash, which was likely at the time one of the top 5 hardest problems in California. Wills' original rating for the problem was V11, as it was logged in the Edwards guide to Santa Barbara Bouldering. Knowing that this mini-guide was going to see a MUCH larger audience, Wills chose to bump the grade of Whiplash down to V10 in a show of humility. Sadly, these days most climbers would bump their first ascent ratings "up" (probably "way up"), and never "down". After shutting down all takers, including myself for over 5 years, I put Whiplash back to it's original V11 rating when I put out Ocean's 11. And I might add that it has seen VERY few confirmed ascents in the last 13 years. 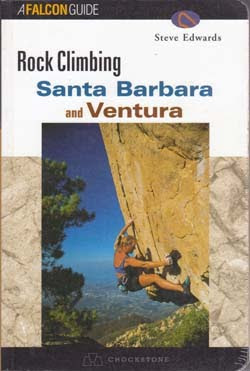 Rock Climbing Santa Barbara and Ventura
- Steve Edwards - October 2000
I've already expressed my distaste for these hideous Falcon guides. They remind me of some weirdo Communist book publisher where everything looks exactly the same and is homogenized down to the last dot. I hate the way they look on my bookshelf and I hate what climbers have allowed them to do to the climbing guidebook publishing game. A lot of the older climbing guides had a shitload of 'flair' for lack of a btter word. I miss that. I miss it a lot. And then there came these big publisher house sanitized guides with 300 pages of enormous areas of coverage that I can pretty much wipe my ass with. Pffft.

That said, Steve put out the best Falcon guide I've seen because he somehow managed to get them to allow a little of himself in it (read: a little, had he self-published it would've been WAAAY better).

The other funny thing about this book is that in the 13 years it's been out, I don't think I've ever used it. My copy still looks like the day I got it. By the time this book came out I had done the old Santa Barbara lines I was interested in and had switched to bouldering nearly full time and was already working on my own book.

Climber's Learn A Leg Up - Greg Crouch - SB News Press - Fall 1998?This was just a short newspaper article that I came across in some stuff that I had cut out and couldn't resist revisiting it. Written by Santa Barbara native cum bitchin' outdoor adventure author and badass Patagonia sufferer Greg Crouch, it's your standard puff piece to get the masses psyched on climbing. The genius of this piece is that when Greg went to Goleta Valley Athletic Club to visit their newly built climbing wall, the guy at the desk (who knew very little about climbing and didn't know Greg was friends with Steve) kept telling him that "Steve Edwards runs the climbing program here at GVAC and he is a world renowned climber". The brilliance of this didn't escape Greg, who mentioned it a couple of times in the article, including the photo caption at right. I think at the time, after we all got in some good-natured jabs at Steve "Mr. World Famous", Steve replied, "Well, I guess I know people from all over the world, right?"

Ocean's 11: Bouldering Around Santa Barbara
- Some Jackass Wrote It - April 2003 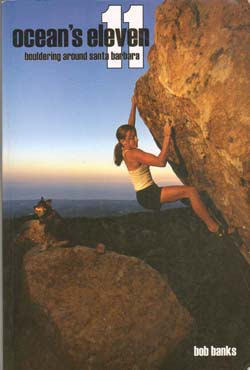 I'm not going to say much on this one, for obvious reasons. And I'm sure that every critical comment I've given on someone else's project could likely apply to O11.

There are things I'd do different on it now, but overall I am still pleased with how this book turned out and I remain quite proud of it. For me, it was mostly a little time-capsule detailing a pretty good few years of climbing history in Santa Barbara. Carrying on the SoCal tradition of "hot chick on not-so good route" on the cover, along with the gratuitous inclusion of the best dog that ever lived on the cover shot with her, and also more photos of a dog inside the book than of any of the humans, how could I go wrong?

The question now is, what's next, and who does it, and how?

I hate to think that physical guidebooks are a thing of the past, but that may be the case. Since I only sell about 5 copies a year, I have enough O11 in stock to last for a while and it's still relevant, but certainly not "up-to-date". Stacks of stuff has been done, new areas have been discovered. Hopefully someone will step up and document their own little time-capsule in some way, because I, for one, would like to read about it.
Posted by bob banks at 11:00 PM